The prominent doctor is himself an enthusiastic Airnergy user

Baden-Baden/Hennef, 9 November 2017 – This year’s „Medical Week“, the medical congress for complementary medicine, which took place from 28 October to 1 November 2017 in the Baden-Baden Congress Centre, recorded a very pleasing result. For the 51st time, numerous doctors, alternative practitioners and therapists from all over the world came together in the city at the foot of the Black Forest to direct the „view to the whole“, to inform themselves about naturopathic therapy procedures and to discuss according to the motto of the event.

More than 300 speakers informed the visitors during the five-day training event in around 200 lectures and 130 courses. Between tradition and innovation, between discourse and experience, the participants discussed the complex aspects of naturopathic therapies. They all had one thing in common: joy and passion to work as an alternative or complementary to conventional medicine for the health and well-being of their patients. 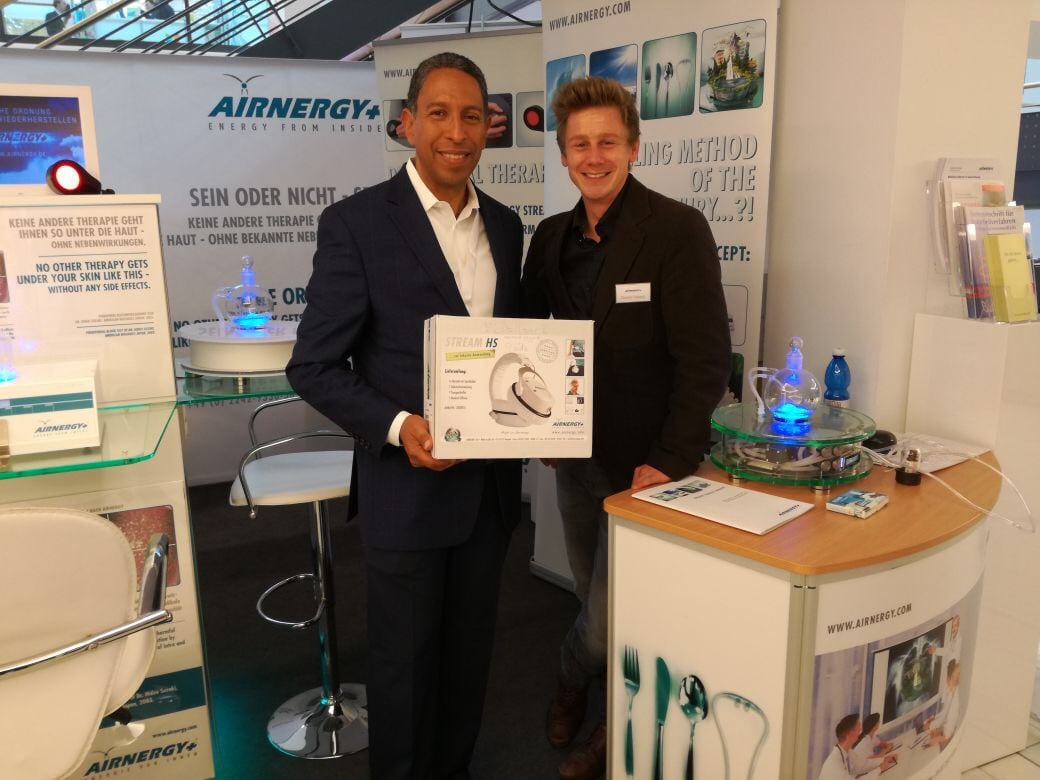 Airnergy was also traditionally represented with an information stand at the Medical Week. Many interested parties received information about the offers of the Hennefer medical device manufacturer, which presented its devices for spirovital therapy and dermovital treatment at the trade fair – including the two new products that are used in particular on the road or when travelling: the „Travel Plus“ and the „STREAM HS“.
The handy little „Travel Plus“ is a mobile breathing station with battery operation for spirovitalization, through which energized oxygen is inhaled for 21 minutes with the help of lightweight, comfortable breathing glasses. It provides valuable help in general medicine and primary care, as well as in rehabilitation, care and prevention.

The practical small STREAM HS ensures the „energy supply from the outside“. It connects two STREAM devices in one „headphone“ and convinces with versatile applications. This eliminates the often annoying manual holding of the device to the body area to be treated during use. Complaints e.B to the knee, ankle, shoulder, neck or hip can now be treated much more comfortably, intensively and efficiently. This also applies to pets, such as .B dogs, whose treatment, dermovitalization, has now also become much easier with the STREAM HS.

Among the numerous visitors and long-standing, mostly international partners who came to the Airnergy booth was Dr. Tony Jimenez. The well-known physician, who is considered one of the leading authorities in alternative cancer therapies and lectures worldwide, is Medical Director and founder of the Hope4Cancer Institute in Playas de Tijuana, Mexico. There he offers his experience in alternative and conventional treatments, using more than 20 different treatment modalities to support the immune system. Tony Jimenez was born in Colombia, grew up in New York and New Jersey, and began his education at the University of Dallas, where he received a Bachelor of Science in Biology/Biochemistry. He received his medical degree from the Faculty of Medicine of the Autonomous University of Guadalajara, Mexico.

„I am happy to have got to know Airnergy’s products – also for my own well-being. When I suffered from migraines last year during medical week 2016, 60 percent of the symptoms of the disease had already disappeared after a single treatment with the STREAM HS,“ the prominent guest emphasized. And Guido Bierther, Airnergy founder and CEO, added: „We are very pleased that Airnergy has received so much recognition and practical application in medical circles and that we can now provide valuable help to people all over the world.“

World COPD Day on November 15 Our air: So essential – and yet so neglected
Nach oben scrollen
Your sub-counters, for both small subsequent and also 30-minute camera in the chronographBR 126 Aeronavale as well as the rolex replica small second subdial of theBR 123 Aeronavale, are usually circled with a thin gilded line, once again taking part to the conventional appear.