„The smoothies are awesome!“

„The smoothies are awesome!“

Not only Heinrich Popow is enthusiastic about Bärbel Baum’s offers

Eitorf/Hennef, 5 December 2017 – Heinrich Popow, one of the most successful, well-known and popular track and field athletes in the world, was already with her and was impressed by her food and drink offer. Just like many other guests. This refers to „Bio Bärbel“, Germany’s first organic bistro with organic kiosk at Markt 21 in Eitorf, and its business owner Bärbel Baum. But not only Popow, multiple Paralympics winner, multiple world and European champion with a total of 29 medals as well as current world record holder in the 100 m sprint and long jump, was enthusiastic about Baum’s vegan, vegetarian and raw food dishes and the top organic drinks she freshly prepared. „The smoothies are awesome – from an ecotropholgic point of view as well as in terms of taste!“ says Popow. And he must know, because as a top athlete he not only receives an excellent diet specially selected for competitive athletes, but he also knows its value and composition very well. This is also because, in addition to his own training at TSV Bayer 04 Leverkusen, he advises the club’s young athletes; he pays particular attention to a balanced, healthy diet of his protégés.
Bärbel Baum, a trained hotel manager and nutritionist for the five-element kitchen with a focus on vital cuisine, developed a four-pillar initiative in the spring together with her cooperation partner, the Hennefer medical device manufacturer Airnergy AG. The expert in the field of „Nutrient-rich foods“ has developed a model that has exemplary character and that is unparalleled in Germany in Germany in view of the still largely stagnating sales figures in the organic sector. 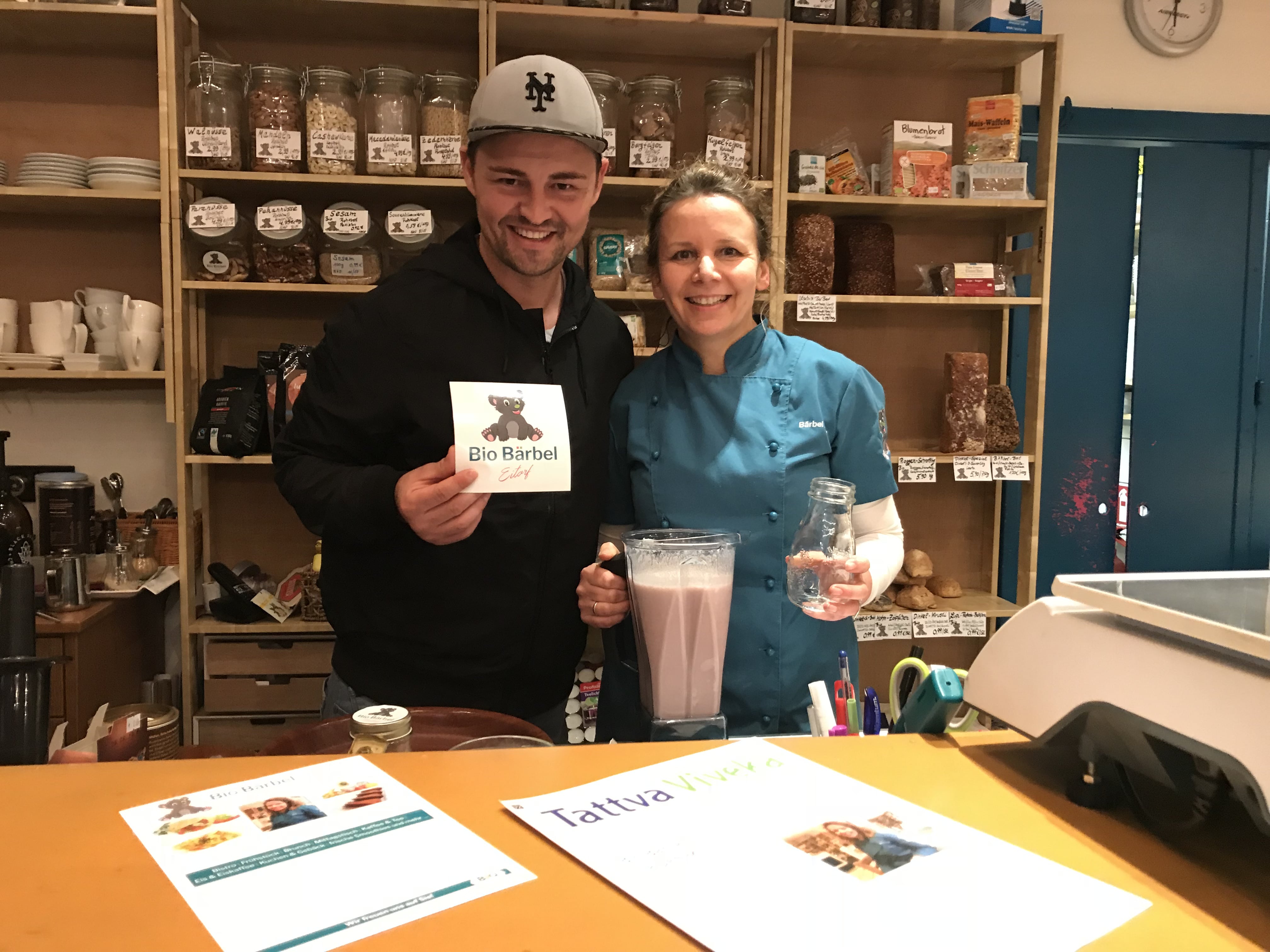 Baum’s goal is, on the one hand, to offer people healthy and tasty food as well as top organic drinks and to inform their customers about everything worth knowing about the topic of „organic“. The organic bistro offers weekly changing dishes and culinary delights from vegetarian, vegan and raw food cuisine as well as homemade cakes and tasty organic drinks on weekdays. Everything is always freshly prepared from natural products. The prices are quite comparable to those of conventional products. The vital smoothies, which are offered in different flavors and of which many guests rave, are a specialty of Bärbel Baum. A 200 ml smoothie, for example, costs 2.50 euros, which corresponds to the price of the same amount of soft ice cream – „is equally delicious, but much healthier,“ says Baum with a wink.

In addition, the dedicated and passionate chef Baum, in cooperation with Airnergy, also provides her guests with particularly high-energy breathing air for holistic repair and regeneration processes. For this purpose, a device developed by Airnergy is used, which treats the oxygen of the ambient air in such a way that it can be optimally converted into energy by the human organism. For this, the company has received numerous awards and prizes.

The importance of our „food“ air can hardly be overestimated. Every day, people breathe in and out about 21,000 times, which is around 7.5 million breaths a year – and thus far more than half a billion in their lives. However, 75% of the inhaled oxygen is exhaled unutilized. Airnergy has developed a method with which the oxygen of the ambient air (21%) is prepared according to the model of nature (photosynthesis in green leaves) in such a way that it can be optimally converted into energy by the human organism. With the use of this innovative healthcare system, energy-rich air is absorbed through the lungs, stomach or skin, where it acts directly as well as transcellularly in the cells. At the same time, the energy spreads via so-called hydrogen bonds via the vascular system and thus intervenes positively in the metabolism. The Airnergy cure is therefore particularly suitable for people with chronic diseases such as chronic obstructive pulmonary disease (COPD), lack of energy or sleep or concentration disorders, but also for athletes for regeneration and for employees in the context of occupational health care.

In April, Airnergy had Bio Bärbel set up a „breathing station to refuel“, which supplemented the range of goods and menus: Four devices for the application of spirovital therapy – with these, energized air is inhaled for 21 minutes with the help of light, comfortable breathing glasses – were initially available to the „spa guests“. Due to the increased demand, Bio Bärbel now uses six of these devices as well as some Airnergy-STREAM HS „headphones“ for dermovital treatment, the energy supply from the outside; Airnergy is already planning a further increase in the number of energy sources that are heavily frequented at peak times.

Word of the new Bio-Bärbel offer quickly got around in Eitorf and the surrounding area. Numerous guests – including doctors, alternative practitioners and therapists from the region – also visit the health food store to inform themselves, discuss or offer cooperations; these would also be possible with clinics or therapeutic facilities. Bärbel Baum’s customers usually opt for 10 or 20 spa packages and are sometimes used with their entire families. And when they are in the store – during the short waiting times for a free Airnergy device – they look around here, become aware of one or the other product and thus get access to the complete organic world. „My health has improved significantly after switching to organic products. And I didn’t believe at first that the breath actions still promote this process. I can only recommend the Airnergy application to everyone,“ says Rainer Patt, taxi operator from Eitorf and one of many spa guests who regularly visit Bio Bärbel.

„I am very pleased about the growing recognition of my work; I am happy to advise anyone who wants to do something for their health – they are very welcome with me,“ emphasized Bärbel Baum.

AIRNERGY Newsletter – Dec 21 2017 Airnergy at COPD – Nicole Renneberg in an interview with R. Patt
Nach oben scrollen
Your sub-counters, for both small subsequent and also 30-minute camera in the chronographBR 126 Aeronavale as well as the rolex replica small second subdial of theBR 123 Aeronavale, are usually circled with a thin gilded line, once again taking part to the conventional appear.