COPD (Chronic Obstructive Pulmonary Disease) is a life-threatening lung disease – it affects about 14% of adult humanity.

COPD is a lung disease on the rise. It affects around 600 million people worldwide – and the number is rising. With somatovital therapy, COPD sufferers can alleviate their symptoms and experience a new quality of life through this therapy.

The effectiveness of high-quality oils is no longer in doubt. The odours of essential oils have a harmonizing, stimulating, calming effect and even lift the mood. They help to achieve a physical and mental well-being and relieve the most diverse ailments in a gentle way. 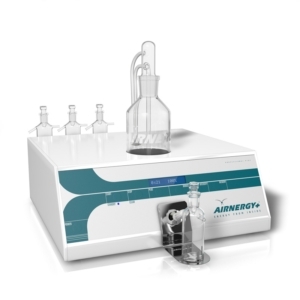 Aromatherapy with COPD oil is also possible for patients with COPD disease. A natural 100% pure blend of eucalyptus, pine needle, peppermint and mint oils ideally offer additional use in the respective use by conventional inhalers or in the spirovital therapy of AIRNERGY by means of the aroma set. The active ingredients of the oil are sent directly to the desired location in the event of respiratory diseases.

Essential oil is still considered one of the best remedies against many ailments, especially when it comes to respiratory diseases.

For example, the eucalyptus oil is antiseptic, so it helps against pathogens and helps especially on the urinary tract and respiratory tract. It relieves cramps and phlegm and cleanses the blood. Furthermore, eucalyptus oil is ideal for asthma – whether it’s a cold, flu, bronchitis or angina. The concentration is also stimulated and the blood sugar level is lowered by the oil.

Pine sprouts have been shown to liquefy mucus on bronchial mucus; an important mechanism, because bronchial mucus contains the annoying pathogens and it also makes breathing much more difficult. The fact that the ingredients are absorbed directly from the airways during internal and external uptake (e.g. inhalation) and thus have a direct effect on the secretions of the bronchi, they can develop their effect at all. Thus, the mucus can also be coughed off more easily after liquefaction.

Peppermint oil has the pain-blocking effect of pain of muscles, nerves and headaches as well as itching. Peppermint oil stimulates the flickering hairs throughout the bronchial tree to increase activity, so that even stuck mucus can be coughed off.

Short description of the clinical picture

COPD is a progressive damage to the respiratory tract and lungs, leading to increasing mucousness and shortness of breath. Two manifestations are possible in varying degrees of severity, on the one hand chronic bronchitis (accompanied by inflammation and narrowing of the bronchi), on the other hand the emphysema (enlargement and damage of the alveoli). Chronic obstructive pulmonary disease is extremely widespread, affecting predominantly over 40-year-old smouldering and/or polluted men. Inheritance plays a lesser role. Symptoms can develop over years (morning coughing of tough mucus, increased mucus formation, coughing, frequent respiratory infections with formation of greenish-yellow mucus, shortness of breath, whistling inspiration). In order to quantify the extent of the injury, the measurement of FEV1 < (70%) paO2 ( < 60 mmHg). It is generally considered that damage caused by COPD with emphysema is largely irreversible, but the symptoms can be alleviated (inhalers, medications, long-term oxygen therapy, respiratory gymnastics, general roborization, flu vaccination). In principle, an improvement in the oxygen supply of all organ systems and an improvement of the immune situation (reduction of mucus formation, infection prophylaxis, formation of less tough mucus) are in the foreground of all therapeutic measures.

All body cells depend on the constant supply of oxygen. The oxygen content of the inhaled air, the functional efficiency of the airways, the diffusion capacity for oxygen from the alveoli into the vascular system, the transport via an intact vascular system and numerically sufficient and functional erythrocytes, an orderly transition of oxygen from the capillaries into the tissue, a permeable interstitium, an intact uptake into the individual cells, further transport into numerically sufficient and functional mitochondria and an optimal enzyme capacity for aerobic metabolism all play a major role. Disruptions are conceivable in many places. In the case of pulmonary emphysema, the problem is primarily due to the insufficient diffusion capacity for oxygen from the alveoli into the vascular system. In chronic bronchitis, inflammation and narrowing are added to the laying of bronchioles or bronchi. The full image of COPD is characterized by the additional formation and the „non-coughing“ of tough mucus and increasing shortness of breath (oxygen distress). There is therefore no lack of oxygen in the breathing air, but the oxygen does not reach the target (mitochondria). Spirovitalisation reduces this deficit or at least partially eliminates the problem. By a short-term activation of the inhalation air before entering the respiratory tract, the initself sluggish molecular oxygen of the ambient air is activated (by formation of singlet oxygen, a stimulated but not radicalized form). This active state lasts only a fraction of a second. Even before the air is inhaled, the activated oxygen falls back to its original (ground) state. In this process, the previously absorbed energy is released again and released to the surrounding water, through which the breathing air is passed. With the inhalation of atmospheric oxygen, the airways are also fed to the energized water as a result of the water vapour saturation of the inhaled air, which initiates the desired increase in oxygen utilization. Due to this water-mediated energy transfer, on the one hand, a multiplication of 2,3 diphosphoglyzerate (2,3DPG), an important vitalizer of the intermediate phosphate group compensation in the conversion of 3PG into 2PG, an important step of the anaerobalactatic energy production in the erythrocytes, occurs on the one hand. In general, the concentration of the 2.3DPG is low, by spirovitalization it is demonstrably significantly increased. This allows 3PG to be converted to 2PG faster, which accelerates the transition from 1.3DPG to 3PG with an increase in the formation of ATP at the same time, with the result that the oxygen binding curve shifts to the right. Thus, with the same O2 saturation of the pO2 is increased or remains the same with lower O2 saturation of the pO2. This means an increased oxygen release to the environment, synonymous with a possible improvement in the utilization of oxygen, which is also manifested in an increase in AVDO2. By this mechanism, the observation seems to explain that spirovitalization, despite less diffusion of oxygen from the alveoli into the vascular system, can contribute to a sufficient oxygen supply to the individual organ systems. A second important effect of spirovitalization is the increase in immune competence. This is caused on the one hand by an increased activity of the white blood count, a reduced readiness for inflammation and a decrease in oxidative stress. Furthermore, spirovitalization (singuletoxygen) has been shown to intercept reactive oxygen types (ROS) or to a reduction in O2 radical formation. Irreversible damage to amino acids in the human body caused by atmospheric nitrate radicals is considered by experts to be a potential cause of respiratory disease.

Survey of end users and therapists

In 2007, the scientific evaluation of declining opinions of Spirovitalend users and spirovital therapists in recent years was carried out, an overall insightful analysis. In 42 minutes, 163 diseases or disorders were reported (3.9 data per protocol). 77 percent of the complaints reported covered functional areas and 23 percent for organic areas. There was no age dependency on success, with figures ranging from 21 to 91 years. Sometimes there was a temporary deterioration, at the latest from the 7th day of application, clear subjective, usually also objective improvements occurred in all cases.

End user
An evaluation of the end-user data on the effectiveness of spirovitalization in organic diseases showed that the device was also successfully used in respiratory diseases, detailed in bronchial asthma, sleep apnea, bronchitis, COPD and pulmonary emphysema. With regard to the functional disorders common in COPD, the end users had a positive assessment of spirovital therapy for energy status (performance, activity, resilience, strength, motivation), well-being (sleep quality, mood, breathing, digestion, pain, immune situation) and regeneration (deepening, acceleration, relaxation, pulse calming). The individual aspects applied to all end users, but the ranking was different depending on the individual starting position. There is therefore no doubt that many of the positive functional changes indicated also affected the clinical picture „COPD with pulmonary emphysema“.

Therapists
The therapist’s assessment also revealed an effective use of spirovital therapy in respiratory diseases. Asthma and COPD were cited as special indications. According to the therapists, functional disorders associated with COPD and asthma can also be well influenced by spirovitalization, especially loss of performance, sleep disturbances and weakening of the immune system.

Short video: Why AIRNERGY for COPD?

Nach oben scrollen
Your sub-counters, for both small subsequent and also 30-minute camera in the chronographBR 126 Aeronavale as well as the rolex replica small second subdial of theBR 123 Aeronavale, are usually circled with a thin gilded line, once again taking part to the conventional appear.